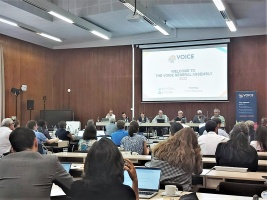 Thus, this brings VOICE membership up to 87 organisations from 19 European countries.

During the one-day members only event, we have discussed the collective achievements as well as challenges of the network in 2021 in promoting principled humanitarian aid.

Another key moment of the day was the exchange with Bernadette Frederick, DG ECHO General Affairs Director E. Among the topics discussed were the Humanitarian Budget 2023, the revision of the  Multiannual Financial Framework (MFF), the reform process of the Grand Bargain 2.0 and the localisation agenda. An important outcome of this year's GA was the adoption of the 2022 Policy Resolution ‘An urgent call to protect principled humanitarian aid’. Each year, apart from many other policy papers, VOICE develops in an inclusive process a joint policy resolution. This year, the network calls on the EU and its Member States to consistently uphold principled humanitarian aid worldwide in light of increasing needs. Please find more information below.

The Assembly concluded with the VOICE Board members, namely, Fie Lauritzen, Dan ChurchAid; Jean-Pierre Delomier, Humanity and Inclusion; Michael Kühn, Welthungerhilfe; and Silvia Sinibaldi, Caritas EU, who were elected for their second mandate to the VOICE Board of Directors.