Lively NGO engagement on the Grand Bargain: from Beirut to Paris via Brussels! 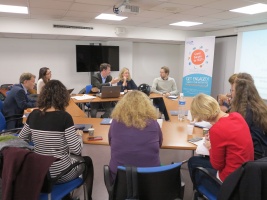 Mid October: VOICE members, CARE (on behalf of the Dutch Relief Alliance (DRA)) and NRC, together with VOICE director, Kathrin Schick, were invited by the Bulgarian Presidency to the monthly COHAFA meeting. They presented good practices from an NGO perspective in implementing the Grand Bargain. Building on experiences in the Netherlands (MFA  partnership with the DRA) and Sweden (partnership with SIDA) concrete suggestions were made by NGOs on how to further strengthen the partnership agreements and to implement key commitments of the Grand Bargain. The COHAFA welcomed the exchange and gave positive feedback.

The power point presentation is accessible on the VOICE website.

End of October in Lebanon: VOICE together with Caritas Lebanon and the support of the two NGO platforms LHIF (Lebanese Humanitarian INGO Forum) and the Local NGO Forum (LNGO) convened an NGO workshop in Beirut to exchange perspective on the Grand Bargain and its commitments. The high level of participation and engagement from INGOs and LNGOs reflects the interest for the initiative. NGOs consider the Grand Bargain to be a relevant process – in the Lebanese context some of the work streams have already had an impact at field level (e.g. on cash-based programming or on the localisation agenda). There is a real appetite for further strengthening the engagement of NGOs in the process both at international but also at country level. VOICE, Caritas Lebanon and the two platforms will explore how best to support their members in that endeavour.

Early November – Paris: hosted by Médecins du Monde, another EU successful workshop on the Grand Bargain gathered VOICE members from France and other EU countries together with EU MS representatives from Belgium, the Netherlands and France. Discussions focussed on how the Grand Bargain initiative can foster the simplification agenda. An introductory panel presented different perspectives on the GB implementation, challenges and opportunities. Then three break out groups discussed the following three themes:

The day confirmed the relevance of the Grand Bargain from an NGO perspective. There is potential to address longstanding issues raised by implementing agencies including on the administrative burden.  Engaging in the Grand Bargain debate and implementation phase is essential for NGOs to be heard and revive the call for simplification!

Stay tuned: The two reports from these workshops will soon be made available on VOICE website and on the GrandBargain4NGos.org website!